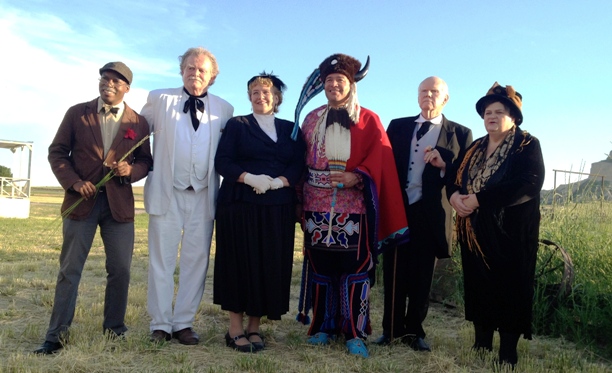 The 2014 “Free Land? 1862 and the Shaping of Modern America” Chautauqua, hosted under the big tent here at Legacy of the Plains Museum, sponsored by Humanities Nebraska and myriad local entities, was a wonderful success. There were a few nights where weather was a challenge, but our community has been immeasurably enriched by the lectures, readings, and other activities surrounding this Chautauqua, which explored “the impact of landmark legislations through the historical lens of homesteading, migration, and displacement on the Great Plains.”

To quote from the Humanities Nebraska website about this Chautauqua:

The Homestead Act, the Morrill Act, and the Pacific Railway Act all were passed within six weeks of each other in 1862, and set into motion sweeping changes for the Great Plains region and the American West. The impact of this legislation was felt by millions of people: war veterans, Easterners looking for new opportunities, immigrants, women, African-Americans and Native Americans.

Now, for some pictures of the event:

The Green Valley Homesteaders opened the inaugural day of the Chautauqua and warmed up the audience for the “meet the Chautauquans” event. LPM Executive Director Katie Bradshaw had her copy of Mark Twain’s book “Roughing It” signed by the author . . .  well, signed by an actor/historian portraying the author, that is. Did you know? Mark Twain had his first sighting of a Pony Express rider as he was traveling west in a stagecoach near the present-day site of our museum. Yes M’am opened the first night of Chautauqua lectures on the stage of the Gering High School auditorium (threatening weather drove the event inside). Warren Brown, AKA Mark Twain, served as the emcee every night and warmed up the audience with a little dry humor.

Betty Jean Steinshouer, AKA Willa Cather, was true to the spirit of Cather’s personality and eschewed standing up on the stage, preferring to speak from the same level as the audience, and vociferously protested photography. Day 2 of the Chautauqua began with a rousing performance of the Gering City Band under the big tent, but threatening weather once again drove everyone inside, this time into the museum’s lobby and community room. Patrick E. McGinnis, AKA Grenville Dodge, drew some chuckles from the audience with his first-person historical presentation. The Green Valley Homesteaders returned to play as Karen Vuranch, AKA Laura Ingalls Wilder, sang an old-timey tune prior to her first-person historical lecture.

Finally! On Day 4 of the Chautauqua, the entire event was held in the big tent. The Torrington Fiddlers opened the evening. Paxton Williams, AKA George Washington Carver, invited a young member of the audience up onto the stage. The Many Nations Dancers took the stage under the tent on Day 5, the final day of the Chautauqua. Taylor Keen, AKA Chief Standing Bear, gave a moving performance, short portions of which were spoken in the Ponca language.

The empty Chautauqua tent on closing night – a bittersweet sight!

Thank you to everyone who supported and attended the Chautauqua and made this event a success!