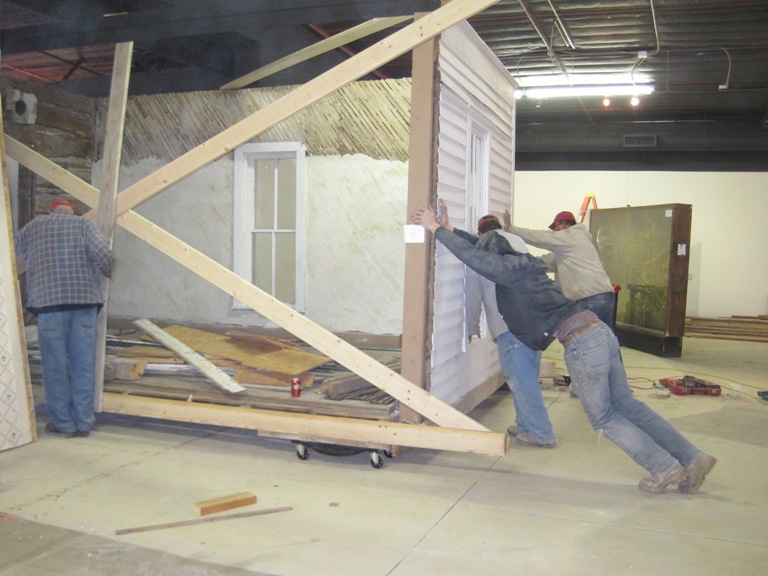 Moving a museum definitely presents challenges. For example, how do you move a three-sided roofless log house?

Thank goodness we were able to raise the funds to call in professionals (Summers House Moving) to assist us in moving the Garlock Cabin from the North Platte Valley Museum building about a mile and a half west to the Legacy of the Plains Museum.

The Garlock Cabin is one room from the oldest existing residence in the City of Gering (it was actually the second residence built, but the first burned down) and was owned by the Frank Garlock family. Frank Garlock was a businessman who signed the original town plat and was among the delegation representing the Gering area in 1887 when talks began to split Cheyenne County into the smaller counties we know today. The cabin was discovered when the property owner was tearing down part of a garage. The garage exterior had been covered with wood frame siding, but underneath were split logs.  Further investigation revealed a signature beam signed and dated by the builder, Martin Bristol – 1887. In 2001, the log house went on display at the North Platte Valley Museum.
Here is a photo of what the Garlock Cabin looked like when it was on display at NPVM: For those of you who are curious:

How to move a log house in 12 easy steps

Step 1: Assemble your equipment. This equipment may include but not be limited to: wood framing, screws, power tools, a trailer, inflatable jacks, house jacks, super heavy-duty casters, and something called a “tank roller.” The tank roller: friend to people who move heavy stuff.

Step 2: Run new joists under the log house to shore up its weakened-by-age timbers and “floating floor.” Secure those joists to a frame installed around the bottom of the house. Step 3: Install bracing across the gaps where one wall and the roof used to be. See the tank roller on the floor there?

Step 4: Use an inflatable jack to slowly, slowly lift the log house. Step 5: Put caster wheels / tank rollers underneath the corners of the log house. Make sure the wheels are pointed in the right direction, and sweep any debris away from the path of the wheels. Step 8: Use house jacks, each independently but simultaneously operated, to lift the log house just high enough for a trailer to slide in underneath. Lower the log house onto the trailer, and secure the load. Step 9: Slowly, slowly pull the trailer down the curb and into the street. Slowly, slowly drive to Legacy of the Plains Museum. (Optional: install a smiley face in the window of the log house to cheer up the people who may get stuck in traffic behind it.) Step 10: Oh so carefully back the log-house-toting trailer into the Legacy of the Plains Museum gallery building. Before backing onto the new, painted concrete floor, clean the mud and gravel off the trailer tires. Step 11: Let air out of the trailer tires to gain a couple inches of clearance under the roof beams. Step 12: Use the caster wheels, tank rollers, house jacks, and inflatable jacks to ease the log house down into its new home at Legacy of the Plains Museum. Remove the cross-bracing, et voilà! The Garlock Cabin is ready to be dressed out again to teach visitors about our Legacy. Look for it to feature in the “Dwellings and Domestic Life” segment of our new exhibits, the first of which will open this September. Copyright 2014 Legacy of the Plains