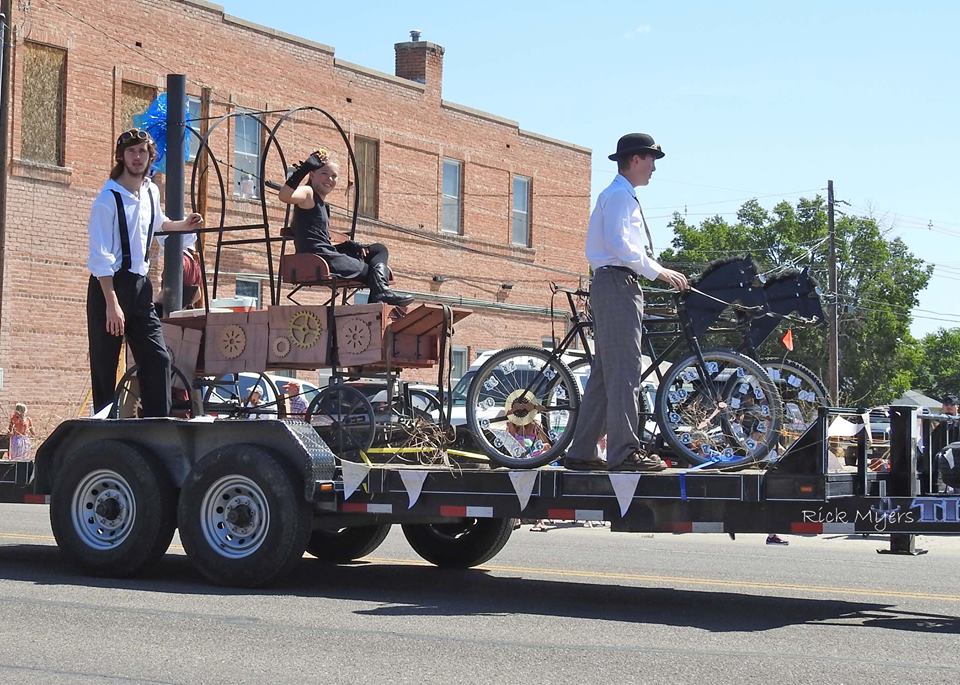 This Saturday during the Oregon Trail Days celebration in Gering, Legacy of the Plains Museum had a parade float entry in their 95th Annual Oregon Trail Days Parade. Titled “Turning Back the Hands of Time”, the parade float was themed as a pioneer steampunk wagon pulled by two bicycle horses in welding goggles. The float was designed by the youth volunteers at the museum: Josie Amoo, Matt Holloway, Jessie Lamp, and Ethan Strey under the supervision of the museum’s archivist, Amanda Gibbs. The youth felt that the float was appropriate regarding the merge of the two previous museums and containing aspects of various parts of the future main exhibit gallery. The wagon used was a replica chuck wagon of the kind used by cowboys, the concept was an alternative history of the Oregon Trail featuring an alternative on popular clothing of the 1800’s (clothing being a concept of our future Domestic and Dwellings zone), and much of the gears were inspired by various gears found on farm machinery and tractors on the museum’s campus. The float also featured a funnel which steamed to make the float appear as though it was “running”, despite being stationary on a trailer.

Legacy of the Plains Museum would like to thank not only the youth, but all the volunteers and community members who helped make this possible.

In the end, the museum placed 1st in the Historical Division. The museum’s First Place Blue Ribbon for the Historical Division.