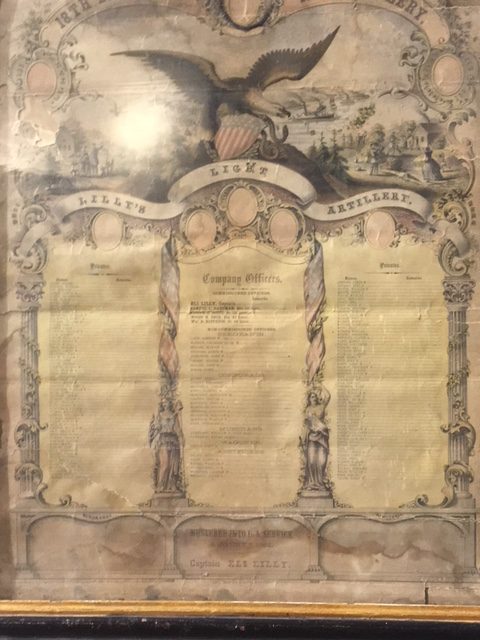 The American flag stands proudly behind the Fallen Man Table.

Every year, Veterans Day is celebrated on November 11th. To honor all veterans that have served our country, both living and deceased, we decided to create an exhibit based around the holiday.

Veterans Day first originated from Armistice Day. Armistice Day marked the end of the Great War, also known as World War I, in 1918. In 1919 President Woodrow Wilson proclaimed the anniversary would be a time when Americans “will be filled with solemn pride in the heroism of those who died in the country’s service and with gratitude for the victory…”. The day wasn’t made a legal holiday until 1938 and even then, it was meant to celebrate World War I veterans. In 1954, President Dwight D. Eisenhower and Congress changed the holiday from Armistice Day to Veterans Day. This change came after veterans service groups urged the president to let the holiday include all veterans. The Veterans Wall at the Legacy of the Plains Museum.

The Veterans Day exhibit consists of three different parts. The first is a wall decorated with pictures of veterans from around the Western Nebraska panhandle. Veterans from all conflicts are remembered and displayed. Community members have been encouraged to bring pictures of themselves and their loved ones to  be put on the wall. We encourage anyone in the area that would like to have a picture featured to email us or stop by. Uniforms on display at the Legacy of the Plains Museum. A uniform display, now in its 3rd year at the museum, is featured in the lobby. 12 uniforms, worn from World War I up to today, are on display in chronological order. Each uniform was selected due to special features on the uniform or the backstory behind it. The selection of uniforms from the museum’s extensive collection was a difficult task but worth while to complete. An additional uniform, worn by a military school student, is also on display in the main exhibit gallery. Artifacts from the Korean and Vietnam War on display.

Finally, the temporary gallery features artifacts from the Civil War on wards. Labels give a brief summary of all of the conflicts the USA has been involved in to date. Unique artifacts, such as an unopened MRE unit, a map from Pearl Harbor, and a 1863 hymnal, are in the cases. The exhibit gives visitors a feel for the day-to-day items military members would have used. It also gives a comprehensive view of Americans involvement in conflicts in the past 241 years.

We would like to extend a special thank you to all of the individuals that loaned uniforms and artifacts to go on display for this exhibit.

If you have pictures you would like to add to our Veterans Wall, please email us, give us a call, or stop on by!